OMEGA BLADE is now a free game Quest game, and can be downloaded from the next Oculus App Lab link:

Shoot, slash, dodge and survive to blade combats in multiple kind of challenges to test your skills and claim your place in the Omega Blade hall of fame.

*This game must be used with an Oculus Quest or Oculus Rift headset with two touch controllers.

*From now on, the App Lab release integrates the Oculus Services Platform to provide instant access to your profile data, friends info, achievements and more.Itch.io will provide also an App Lab code that can be redeemed on the Oculus Smartphone App.

*Omega Blade is nominated to the Malaga Indie Games Awards 2021 in the TechXR category, whose winner will be decided by the jury next 12 of November.

Full body action - You set your own peace and combat style based on. Decide the way you want to play it.

Enemy types - There are several kind of enemies, and they attack or defend themselfs in different ways.

Challenges - Omega Blade don't set a single infinite wave, but a large number of challenges with different weapons, enemies, life, stage and goals combination to keep surprising the player and provide all kind of new feelings.

Leaderboard - A leaderboard shows your position in each challenge, so you can try to dominate it.

Per match rival - Each time you play a challenge, the system will pick a target rival score, and your main goal will be to overscore it.

Friend list - You will be able to know your position among your friends playing Omega Blade in each challenge. Try to rule over them.

Achievements - 50 achievements including events such as challenge completion, number of enemies destroyed, accuracy, execution style, your control over reflected bullets and more.

Body weapons grab - In the challenges menu, the screen will show you the weapons available and their body position. During gameplay, move your hand close to the weapon region and grab it.

Weapons appearing in the current challenges:

Onscreen icons will appear when you indicate what weapon each hand is over. Shoulder items can be grabbed easily placing the hand in front of the face.

Long weapons such as the machinegun, shotgun, sniper rifle or the spear must be grabbed using both hands. Some weapons like the machinegun will lose accuracy if used one handed, and others like the spear will not extend their energy blades.

You can launch and regrab your weapons before they autodestructs. This is useful to perform a fast blade grip change, change a revolver from one hand to the other... or just to feel cool.

You can use blades to reflect bullets and defend yourself. Some game modes are based on this action

When you destroy enemies in a stake you will get combo points. The combo counter will reset if you don't destroy a new enemy soon.

Destroying an enemy shooting down a certain weak point can provide a coreshot bonus. Most enemies have some points that can be destroyed individually or in group to obtain an additional bonus prior to destroying them. Experiment shooting enemies down piece by piece to discover how to trigger each one of them and maximize your score.

Some game modes will ask you to reflect positive and negative energy bullets with the correct weapon to gain a bigger bonus. Others will ask you to destroy targets using only the right energy or a penalization will be applied.

A wrong blade weapon crashing a positive or negative surface will result in the blade desintegration (but will be regenerated in the body).

While single hand weapons are grabbed, the pose will be modified attending to your thumb and index position. Some poses may become helpful when using some weapons.

If you aren't able to find a pending enemy to shoot it down, remember you can press the right controller A button to display a 3d map on top of your hand. Press A again to dismiss it.

The sniper rifle zoom is controlled by means of a yellow dot placed in the scope. Grab it and a virtua line will appear from the scope to your hand. Make the line longer or shorter to control the zoom level. The scope is further from your eye to allow you to press your arms againts your body to increase your accuracy.

Some stages will keep the action focused in the front, while other stages labeled as 360º ones will allow enemies to be deployed and attack you from any direction.

ABOUT THE DEVELOPMENT TEAM

I started developing this game because I didn't find the kind of experience I really would like to play when Oculus Quest was released. I expected for a long time a more physical challenge, with few to no aid on performing cool actions, so that anytime you do something cool you feel proud of it.

The game took several forms until its current state after I played a lot with my friends. It became an easy to use game that everbody can enjoy, but hidding at the same time a set of layers that hard players will use to their advantage or to become a real badass inside the game.

Hope you all enjoy it!

SLASH UPDATE (v1.3.0) - Now I'm working to improve the audio mechanics for the next challenges, include the shotgun, the shield disk, and one more kind of weaponry control I codenamed Omega Man.

Also, the slash update will include more vicious close combat with bipeds, so you will not have to dash after them anymore, and two new combat environments for this new bipeds Slash behaviour. One of them is The NeoDojo that will suit the fast face to face combats.

App Lab release. Omega Blade has been integrated with the Oculus Services so now your Oculus Picture and User Name will be used automatically in the leaderboards, and your friends playing the game will be displayed there too.

The leaderboards have been reset as Oculus Services will be used from now on.

Oculus achievements have been integrated. Now more than 50 different achievements are available and more will be released with each new update.

Hotfix - When no network connection is available users are allowed to play agains their best score. The functionality was accidentally disabled in v1.1.0 and was enabled again in v1.1.1.

Tutorials were modified and now will be displayed as videotutorials before challenges. The tutorial system will try to show you only 1 videotutorial per time, being the first ones weapon grabbing and mobility ones. Later on, it will explain weapons usage depending on the selected challenge. 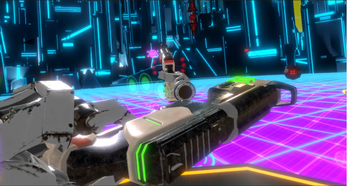 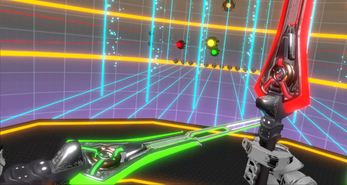 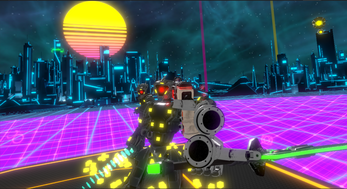 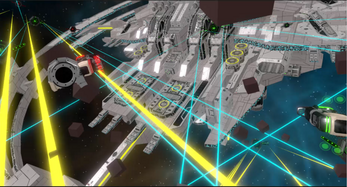 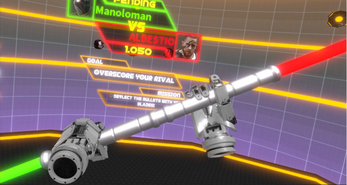